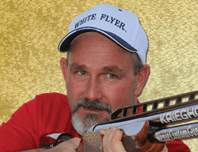 “Being consistent in one’s approach to the game of trap shooting, I believe, is the best way to achieve success. From your gun mount to the gun itself, from the shells you use to the targets you break with them. Consistency is the key. So, doesn’t it make sense that the targets we shoot are the best too? Shoot the best, insist on White Flyer Targets and you’ll never be disappointed.” Sean

CONSISTENCY ISN’T THE FIRST THING, IT’S THE ONLY THING.

Just a few of Sean’s many accomplishments include:

Contact Sean for lessons at (435) 655-1501 or email vrgc1@yahoo.com to schedule a lesson and start making your White Flyer memories today!

A beautiful sunrise here at the 44th Southwestern

Today is the beginning of competition for the 2022

The North East Regional and FITASC Grand Slam #4 i

We welcome everyone to the 2022 Grand American! Do